You have my deepest condolences if you are looking for my skills for this event. Funerals can be a very difficult time for families. Hiring a piper in this case can create a very solemn and haunting effect. The last thing you want to worry about while trying to organize a funeral is the music. Let me ease your burden by giving you some examples of music as well as when the appropriate time for a piper to play would be.

As guests are arriving to pay their respects, it can be nice to have a piper play as people are entering before the service. It can have a very calming effect and bring on the feeling of solidarity.

PIPING IN THE CASKET

Having a loved one piped in can produce a very powerful emotional effect. It commands respect from guests as well as clearly defines the purpose as to why people have gathered together.

PIPING AFTER THE EULOGY

Many times I’ve been asked to pipe after the eulogy as a symbol of respect and just a nice way add ease to an already heavy situation. For these moments, I generally suggest the ground of a Piobaireachd (pronounced pee-brok), which is the classical music for the highland bagpipes. Although this music generally doesn’t have a metered tempo, it has a very emotional feel to it. These classical pieces of music are over 400 years old. They were passed down orally from instructor to student, from generation to generation until the science of written music was shaped into what we know now. Therefore, if you’re looking for a very ancient feel, piobaireachd is the way to go.

PIPING OUT THE CASKET

Having a piper at an interment is also a fairly popular option. In our Canadian winters, sometimes interments have to be postponed. It’s always a nice touch to have a piper at these events.

This generally tends to be associated with the more military aspect of the bagpipes. Hiring a piper for a memorial can really add that aspect of remembrance to a ceremony. For military functions, this is usually done with a bugle horn which would perform “Taps” or “The Last Post”. 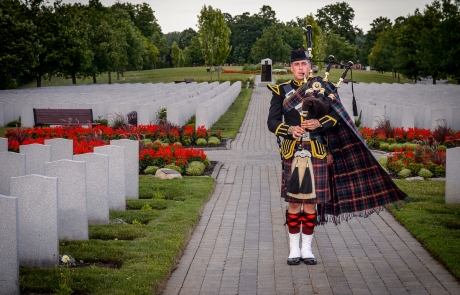